History of the Old Ruthinian Association 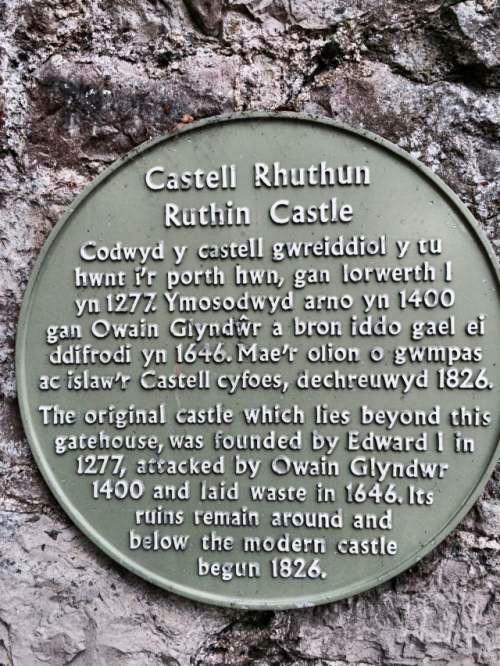 The History of the O.R.A.

In 1974, I joined the Committee of the O.R.A., which at that time was considering various senior O.R.s, one of whom to be appointed to the Office of Association Patron. Vorley Spencer Ellis, M.A., (Oxon.) Head Boy in 1898, Dean of St. Asaph 1932 – 1957, past Chairman of the School Governors, was chosen.

He lived in Hawarden and I living in Denbigh was requested by the Committee to go and see him, and ask him to be Patron. He was delighted, over ninety years of age he still took Church Services regularly. I should add, he was very hard of hearing. He bellowed. “No one sleeps through my sermons” was one of his comments.

I had envisaged a short visit, but on enquiring my name, he found he had been great friends with my father's father who started at Ruthin School on the same day as he had, and my mother's father, a Church Warden in Tremeirchion, had sat on various committees with the Dean. I was there for hours. In the end I persuaded him to dictate to his wife the stories he had regaled me with. It is from this letter that the Victorian Origins of the O.R.A., have come to light.

Red for the blood of sacrifice,

Blue for the peace of the evening sky;

Yellow for the cheer of the bright morning Sun,

Black for the eternal memory of departed friends.

These words were passed to Vorley on his arrival in St. Asaph as Dean, by an elderly O.R. who lived in St. Asaph, who had served in the Army throughout the various Victorian Campaigns in Africa, where several ‘serving'O.R.s had been killed or succumbed to disease. These O.Rs., were at School when Edward L. Barnwell, M.A., was Headmaster, and he wrote the verse in their memory.

On December 31st, 1899, Vorley had attended his first O.R. Dinner, in celebration of the New Century, at the Wynnstay Arms, Well Street Ruthin. The senior O.R. present was from Staffordshire. He had joined ‘the Colours'as his grandfather and father - both O.R.s – had before him. The elder had served under Wellington, and his father had at one conflict divided his troops into two units, and used his School Colours Navy Blue and Maroon to distinguish them.

His father used to boast that on leaving the Army he had attended his first O.R. Dinner in Ruthin in 1847, and not missed an Annual Dinner. He died in 1879. Having inherited the family business from his father, he had been pleased to continue the family tradition and he too had never missed the Annual Ruthin Dinner. That night in 1899, it was his twenty first Annual Dinner. Fifty three years of consecutive Annual Old Ruthinian Dinners!

At this 1899 Dinner, this senior O.R. had brought with him his ‘bat man'and a copious supply of sherry and wine, which he generously shared with the O.R.s present. Some of these O.R.s, Vorley included had been offered, and accepted accommodation in the dormitories at School, which was closed for the Christmas Holiday.

Following the Dinner, the O.R.s visited the Feathers and the Anchor walking back to School. In the Anchor they purchased a ‘barrel of beer'and rolled it back to school. Not the modern road, we all know, but a rough stoned, rutted road, that shook the beer badly.

On arrival at School, they found three or four boys who had for family reasons stayed at School. O.R.s today pride themselves on being hospitable, and these boys were invited to participate in drinking the beer when the cask was opened.

The following morning the Headmaster Watkin Pryce Whittington, M.A. (Oxon.) was incandescent, they had brought the beer into School and had proffered it to under age boys.

His retribution was both simple and devastating for the O.R.s. They were summoned into ‘the front room', where a roaring fire burned in the grate. He lectured them, then requested them to empty their pockets onto the table and produce their train tickets. They thought he wished to know that they had the means to leave Ruthin. He then walked round the table, and collected the cash and train tickets. The cash he said would be shared amongst the domestic staff who would have to clean up after them, the tickets with a flourish he threw into the flames. They were instantly dismissed.

Vorley got home through the generosity of one local family he knew, who loaned him the train fare to Denbigh. He then walked the twelve miles home to the Rectory at Llansannan.

During the First World War the Dinners continued, though numbers rarely achieved double figures. In 1919, O.R.s had gathered in some force, there was over fifty for an Annual Dinner at the Castle Hotel, St. Peter's square.

Then followed the twenties, depression and ruin for many, but the Dinners continued. The early thirties saw a surge in numbers which lasted until War erupted again in September 1939, just before a proposed Dinner, which went on though there was just seven present. The worst year 1940, a Dinner had been planned but petrol was scarce, food even more so, and in the end, Vorley acquired a chicken, which he took to School, and the School Cook prepared and served Mr. Russell and himself. The link was not broken.

In 1941 there were five or six and for the rest of the War the number did not increase. With the return of peace in 1945 there was over thirty O.R.s present. This unbroken line provided the impetus for the returning servicemen O.R.s who led the Association into the 1960's and beyond.

Vorley commented further ‘I suppose we were negligent really, for though we dined and always thoroughly enjoyed ourselves, we neglected the paperwork. One meeting appointed a Recorder, who certainly took notes and produced Minutes, but not all, and the papers created were not kept safely. Then of course there were few Office Machines, but that's an excuse. If you are to be Recorder, keep what you create, find what you can and place them somewhere safe for posterity. Sadly, during 1952 or 1953, the Recorder – Rev'd. E. Harries-Jones, B.A., O.R., returned home one evening to find his Vicarage had suffered a severe fire. Many of his possessions like our minutes were totally destroyed'.

I am pleased to report I recently started a Deposit with the Denbighshire County Archive, The Old Jail, Clwyd Street, Ruthin on behalf of the Old Ruthinian Association! If you have some free time, make an appointment, examine our Deposit, though you will find the building has thousands of far more interesting papers to interest you!

The 168th consecutive O.R., Annual Dinner is now just three weeks away, the list of those attending is like all before. There will be young people in their twenties, and several in their eighties, with representatives of all the years in-between.

Recently I discovered three bound volumes of ‘The Ruthinian'from the early 1870s through to the First World War. One has details of O.R. Dinners held every other year from 1785! The research for this information was by the Rev'd. David Richard Thomas, M.A., O.R., who compiled a ‘History of the Diocese of St. Asaph'. This, the first Diocesian History produced in Britain, is as yet to be re-written!